One thing that I have always struggled with in my relationship with God, is that I have always had a tendency to judge how much he cares about me based on how much he is intervening in my circumstances. For example, if I am in the middle of a difficult time, and He does not immediately take the pain away, then I might think that He does not care about me or that I have done something to upset Him. It is a complete misconception to think that God’s job in my life is to affect my circumstances so that they work out how I want them to work out. It was not until recently that I started to realize that God is more concerned about who I am than He is about my circumstances, because I bring who I am into every one of those circumstances.

I recently had a situation at work that helped me learn this important lesson. We were about to get our yearly bonus, and I was excited because every indication was that mine was going to be really good this year. When I finally received the check, I was shocked to find out that it was significantly less than last year. I took the matter up with my boss and with HR. They were as shocked as I was, so both of them started making phone calls to find out what had happened. To make a long story short, I was told that I had fallen victim to a new HR policy that had just been rolled out. 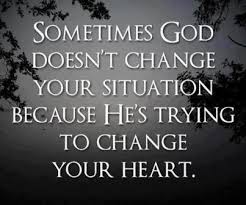 Right about the same time this was going on, I received my normal biweekly paycheck. On that check, I had just happened to get overpaid by about the same amount that I was being shorted on my bonus. It was some sort of payroll error. I was now faced with a decision. I could just take the extra money and call it even. No one would ever know. Or I could tell the payroll department that I received more money than should have. This was obviously no coincidence. I thought the entire time that this had been about the money, and I had been praying for God to make sure I received the full bonus. The truth is that it was not about the money at all, God wanted to know where my heart was when it came to money.

I ended up going in and explaining to the payroll department how I had been over paid. I realized that it was way more important to uphold my integrity in accordance with God’s truth than it was to have some extra cash in my bank account. God was much more concerned about me and my heart than He ever was about the money. The amazing thing is that over the next few weeks following that incident, God moved miraculously and provided me with completely unexpected funds that more than doubled what I did not receive in the bonus.

Whether or not you feel like God is involved in your current circumstances, I promise you that He is. He may not be involved in the way that you would prefer, but He knows exactly where you are. His thoughts are higher than our thoughts. His plans are to prosper you and not to harm you, and sometimes the best way for Him to do that is for our situation not to work out how we would like it to. That is why the word says “His kingdom come, His will be done,” and not “Our kingdom come, our will be done.”

I have a heart for setting people free from spiritual bondage and world oppression. I believe that the radical love of God manifested through his people can transform the world, and I believe that journey begins with us on our knees in a place of humble submission to God’s will.